Against the Fascist Creep

“A comprehensive overview of the history and space of fascist ideologies and their current transformations.” —Marlene Laruelle, author of Russian Eurasianism: An Ideology of Empire

William Gillis, “Against the Pull of Simplicity and Disconnect,” C4SS, April 2, 2017.

“Part of the reason that knowledge about the current global land grab is so uncertain is the paucity of perspectives and analysis in defining the problem. This book fills the gap admirably. Think of it as a mix-tape, in which you’re led from rural, urban, indigenous, Earth First!, Global North, Global South, policy wonk, insurgent, high theory, and high praxis. Listen for the new voices and the new ideas—you’ll be humming them for years to come, and you’ll have heard them here first.” — Raj Patel, author of Stuffed and Starved My work has also appeared in the following: 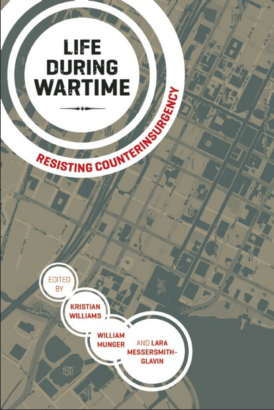 “In this radical collection, insurgency is defined as popular resistance to the state, and America is the state in question… Together, the writers sound a sobering warning: the American government is an iron fist in a velvet glove whose purpose remains preserving the status quo and enriching the rich… [I]t’s hard to discount the evidence presented here of heavy-handed tactics (injunctions, informants, provocateurs, mass incarceration) that have Democratic and Republican politicians alike up in arms.”—Publishers Weekly

“In Setting Sights, scott crow pulls together an important collection of historic and contemporary essays and interviews on politically informed armed self-defense. Thoughtful, considered, compelling, and even provocative, this edited collection brings together many perspectives, raises important questions, and gives considerable attention to the ways race and gender inform these crucial issues.”
—Emilye Crosby, author of A Little Taste of Freedom: The Black Freedom Struggle in Claiborne County, Mississippi